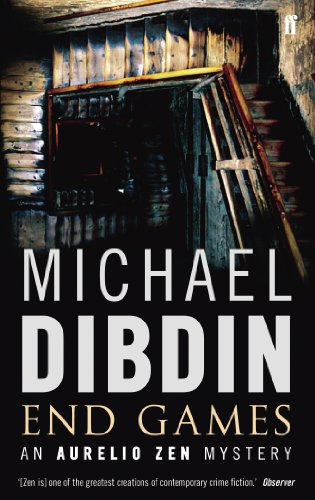 The dead man followed the track until it rose above the last remaining trees and ceased to be a rough line of beaten earth and scruffy grass, to become a stony ramp hewn out of the cliff face and deeply rutted by the abrasive force of ancient iron-rimmed cart wheels. By now il morto was clearly suffering, but he struggled on, pausing frequently to gasp for breath before tackling another stretch of the scorched rock on which the soles of his feet left bloody footprints.

Aurelio Zen's final case brings him to remote town of Calabria, at the toe of Italy's boot, on what is supposed to be a routine assignment: the death of a scout for an American film company. But the case is complicated by a group of dangerous strangers who have arrived to uncover another local mystery - buried treasure - and who will stop at nothing to achieve their goal. The case rapidly spirals out of control, and Zen must penetrate the code of silence in the tight-knit community in order to solve the crime.

If you enjoyed the Inspector Zen Mystery series you may also like The Last Sherlock Holmes Story, another crime novel by Michael Dibdin.