Showing Thermopylae: The Battle for the West by Ernle Bradford 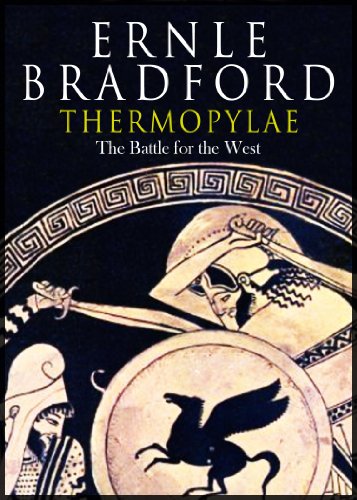 The struggle between the Persian army and the Spartans in the battle of Thermopylae in 480 B.C was a turning point in the Greco-Persian wars.

The ambitious Persian King Xerxes planned to conquer the Greek world by launching simultaneous attacks on Thermopylae and Carthage.

Xerxes had assembled one of the largest armies ever thrown into battle.

Leonidas's troops were a small fraction of the Persian forces.

And yet despite the overwhelming odds against him, Leonidas and his men stood their ground for three days in an historic display of patriotism and courage.

It was one of the greatest battles of the ancient world, and one that was to be studied by military strategists for centuries to come.

'Thermopylae: The Battle for the West' is the gripping story of that decisive conflict.

The acclaimed historian Ernle Bradford tells the story of the battle, including the building of the bridge at Hellespont, the events at Carthage and the battles at Thermopylae, Salamis and Plataea.

He draws on the works of Herodotus, Plutarch and Aeschylus for historical accuracy.

'A gripping story' - The Economist.

Ernle Bradford was a leading British historian specializing in the Mediterranean and naval issues. A prolific author, his works included books on Julius Caesar, Hannibal and Nelson.