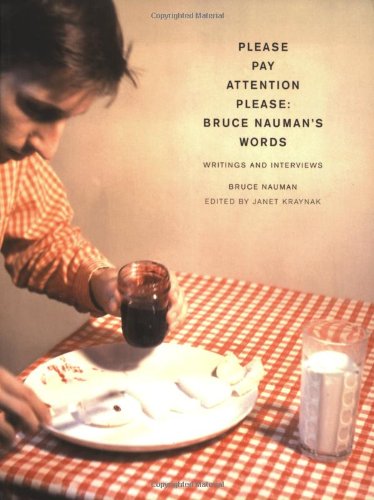 The most comprehensive collection to date of the artist Bruce Nauman's writings plus all of his major interviews from 1965 to 2001.

Since the 1960s, the artist Bruce Nauman has developed a highly complex and pluralistic oeuvre ranging from discrete sculpture, performance, film, video, and text-based works to elaborate multipart installations incorporating sound, video recording and monitors, and architectural structures. Nauman's work is often interpreted in terms of movements and mediums, including performance, postminimalism, process, and conceptual art, thereby emphasizing its apparent eclecticism. But what is often overlooked is that underlying these seemingly disparate artistic tendencies are conceptual continuities, one of which is an investigation of the nature of language.

Unlike many of his contemporaries, Nauman has refrained from participating in the critical discourse surrounding his own work. He has given relatively few interviews over the course of his career and has little to do with the art press or critical establishment. Indeed, he granted Janet Kraynak and The MIT Press almost complete autonomy in the preparation of this volume. In contrast to Nauman's reputation for silence, however, from the beginning of his career, the incorporation of language has been a central feature of his art. This collection takes as its starting point the seeming paradox of an artist of so few words who produces an art of so many words.

Please Pay Attention Please contains all of Nauman's major interviews from 1965 to 2001, as well as a comprehensive body of his writings, including instructions and proposal texts, dialogues transcribed from audio-video works, and prose texts written specifically for installation sculptures. Where relevant, the texts are accompanied by illustrations of the artworks for which they were composed. In the critical essay that serves as the book's introduction, the editor investigates Nauman's art in relation to the linguistic turn in art practices of the 1960s―understanding language through the speech act―and its legacy in contemporary art.