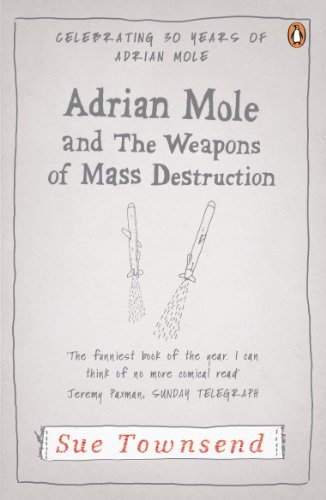 Adrian Mole and The Weapons of Mass Destruction is the sixth book in Sue Townsend's brilliantly funny Adrian Mole series.

I am thirty-five today. I am officially middle-aged. It is all downhill from now. A pathetic slide towards gum disease, wheelchair ramps and death.

Adrian Mole is middle-aged but still scribbling. Working as a bookseller and living in Leicester's Rat Wharf; finding time to write letters of advice to Tim Henman and Tony Blair; locked in mortal combat with a vicious swan called Gielgud; measuring his expanding bald spot; and trying to win-over the voluptuous Daisy . . . Adrian yearns for a better more meaningful world. But he's not ready to surrender his pen yet...

Sue Townsend is Britain's favourite comic author. Her hugely successful novels include eight Adrian Mole books, The Public Confessions of a Middle-Aged Woman (Aged 55¾), Number Ten, Ghost Children, The Queen and I, Queen Camilla and The Woman Who Went to Bed For a Year, all of which are highly acclaimed bestsellers. She has also written numerous well-received plays. She lives in Leicester, where she was born and grew up.