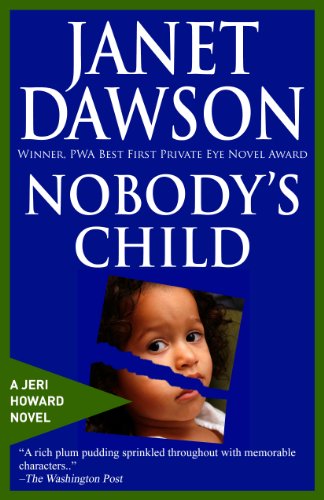 “Janet Dawson, whose Jeri Howard never fails to enlighten and entertain, even in the grimmest of circumstances. Dawson is a writer with the courage to take on the big issues without flinching and this time her plot revolves around the homelessness and the impact on ‘nice’ middle-class families when the HIV virus invades their lives.” Val McDermid’s Crime Beat, Manchester Evening News -

It’s a cold rainy winter. Oakland PI Jeri Howard is having a tough time getting into the Christmas spirit – and dealing with a prickly client. Naomi Smith’s daughter Maureen ran away three years ago. At various times Maureen was homeless. Now she’s dead and her two-year-old daughter is missing. It’s dangerous out on the mean streets of Berkeley, for an adult let alone a child.

Can Jeri find the little lost toddler before time runs out?