Showing North Carolina's signers: Brief sketches of the men who signed the Declaration of Independence and the Constitution by Memory F. Mitchell 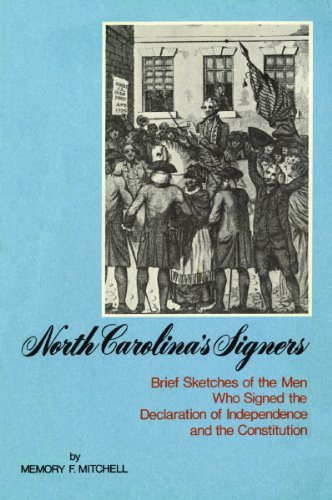 This informative booklet contains biographical sketches of the three North Carolinians who signed the Declaration of Independence (Joseph Hewes, John Penn, and William Hooper) and the five who signed the Constitution of the United States (Alexander Martin, William Richardson Davie, Hugh Williamson, William Blount, and Richard Dobbs Spaight Sr.). Separate sections discuss the Halifax Resolves, the Second Continental Congress, the Articles of Confederation, and the Federal Convention. Included are the complete texts of the Declaration of Independence and the Constitution of the United States.