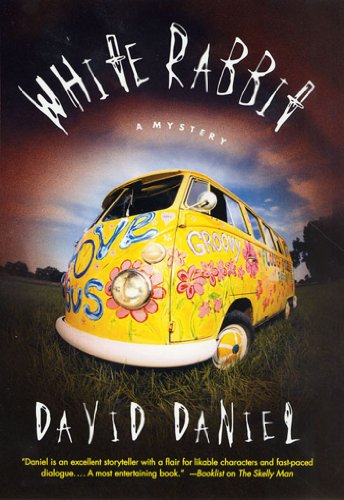 The Sixties -- San Francisco, Haight-Ashbury, the Summer of Love. It’s a wistful memory for some, and it brings envious sighs for those too late to experience it. David Daniel vividly recreates that world and its legends in White Rabbit - and then injects a harsh dissonance into the flower children’s songs of peace, love, sex, and marijuana. It is easy to see that the collection of young people who gathered in San Francisco in those few summers could be tempting prey for a murderous sociopath. They discarded their real names, had no set address, hid from their families, were often stoned. And they took one another at face value, asking no questions.

The search for the killer leads to an unusual collaboration. Can a no-frills police officer, grieving for his dead wife, stepped down from homicide detective to vice cop, have anything in common with a young hippie woman who writes for an alternative newspaper and whose lover is determined to turn a demonstration for peace in Vietnam into a violent revolution? Both seek the killer, working from opposite ends of 60’s society, and mistrusting each other. Sparrow has his enemies in the SFPD; Amy has doubts about her lover’s plans for violent action. Both are aware that cooperation between them and the sharing of their special knowledge is their only option. By the breathtaking climax, where Amy herself becomes the target, it is clear to Sparrow that he must confront the killer and his own demons as well in order to save her, his city -- and himself. Daniel has wonderfully captured the joys and frenzies of the Haight-Ashbury streets in those spirited days. For all of us who missed the Summer of Love, for whatever reason, White Rabbit is a fascinating trip, serial killer and all.