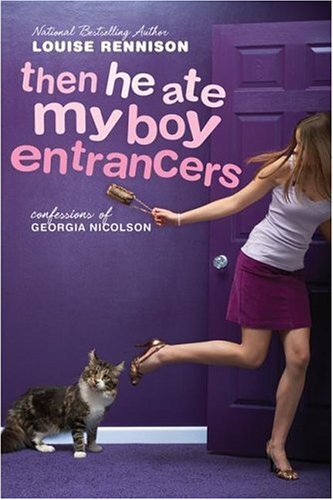 Rennison’s subversive diaries of teenager Georgia Nicholson, now into their sixth volume of reprehensible marvelosity, have been consistently funny and uproariously real ever since her first confessions, contained in Angus, Thongs and Full-Frontal Snogging appeared yonks ago in 1999. The unique language of Georgia’s hectic existence, and assorted life disasters--her day-to-day relationships with friends, family, cats, various other olds and potential love gods---all add up, each time, to an unmissable feast for her fans and new devotees alike.

Georgia, pining for her new wannabe heart throb and Italian-American stallion Masimo, who is currently visiting rellies in the States, is bolstered by the news that she and Mutti and Vati are off to Hamburger-a-gogo land as well. It’ll be the perfect opportunity for Georgia to partake of a really long holiday snogathon with the (probable) man of her dreams. Slight problem number one is that Masimo is in New York, and the Nicholsons are headed to Memphis.

But all is not lost. Jas, Georgia’s bestest mate from the Ace Gang, can go with them and she can help get the two lovebirds together. Slight problem number two is the re-emergence in her life, via letters from Kiwi-a-gogo land, of Robbie the love god. What with Dave the Horn never far away either, the future of Georgia’s mixed-up love life is reaching a critical, decision-making stage.

There’s no better series of books for teens around at the moment that capture more accurately the trials of life in the hormone-emerging fast lane. Rennison, a stand-up comedienne of some renown, injects each page with the sharpest, wittiest and achingly relevant material there is. It certainly doesn’t get any better than this. And… it’s another cliffhanger ending, so expect more marvy confessions soon.