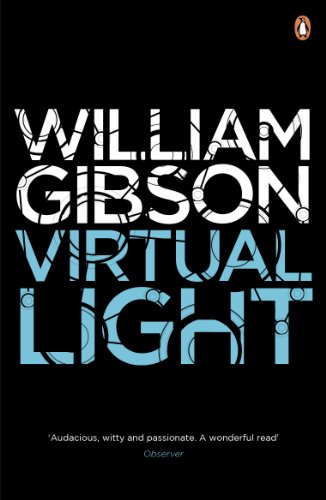 Ex-cop Berry Rydell's lost one job he didn't much like and landed another he likes even less. Some sunglasses - actually high-end kit involving Virtual Reality and super-sensitive data - were stolen from a courier, and a man named Warbaby's been charged with retrieving them. Warbaby needs a driver and Rydell is the perfect fit. But when the courier is killed and Warbaby gets to work - giving Rydell a taste of what's expected and exactly what's at stake - he has second thoughts. Especially when he comes face to face with Chevette, stealer of sunglasses, who'll land an ex-cop in a heap of trouble . . .

'Studded with crackling insights into the relationship between technology, culture and morality, Virtual Light doesn't miss its stride for a nanosecond' Time Out

William Gibson is a prophet and a satirist, a black comedian and an outstanding architect of cool. Readers of Neal Stephenson, Ray Bradbury and Iain M. Banks will love this book. Virtual Light is the first novel in the Bridge trilogy - read Idoru and All Tomorrow's Parties for more.

William Gibson's first novel Neuromancer has sold more than six million copies worldwide. In an earlier story he had invented the term 'cyberspace'; a concept he developed in the novel, creating an iconography for the Information Age long before the invention of the Internet. The book won three major literary prizes. He has since written nine further novels including Count Zero; Mona Lisa Overdrive; The Difference Engine; Virtual Light; Idoru; All Tomorrow's Parties; Pattern Recognition; Spook Country and most recently Zero History. He is also the author of Distrust That Particular Flavor, a collection of non-fiction writing.