Showing The Big House: A Century in the Life of an American Summer Home by George Howe Colt 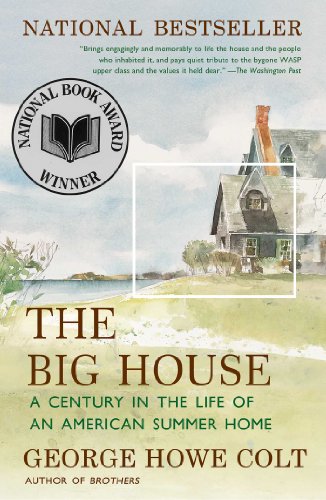 In this intimate and poignant history of a sprawling century-old summer house on Cape Cod, George Howe Colt reveals not just one family's fascinating story but a vanishing way of life. Faced with the sale of the treasured house where he had spent forty-two summers, Colt returned for one last August with his wife and young children. The Big House, the author's loving tribute to his one-of-a-kind family home, interweaves glimpses of that elegiac final visit with memories of earlier summers spent at the house and of the equally idiosyncratic people who lived there over the course of five generations.

Built by Colt's great-grandfather one hundred years ago on a deserted Cape Cod peninsula, the house is a local landmark (neighboring children know it as the Ghost House): a four-story, eleven-bedroom jumble of gables, bays, sloped roofs, and dormers. The emotional home of the Colt family, the Big House has watched over five weddings, four divorces, and three deaths, along with countless anniversaries, birthday parties, nervous breakdowns, and love affairs. Beaten by wind and rain, insulated by seaweed, it is both romantic and run-down, a symbol of the faded glory of the Boston Brahmin aristocracy.

With a mixture of amusement and affection, Colt traces the rise and fall of this tragicomic social class while memorably capturing the essence of summer's ephemeral pleasures: sailing, tennis, fishing, rainy-day reading. Time seems to stand still in a summer house, and for the Colts the Big House always seemed an unchanging place in a changing world. But summer draws to a close, and the family must eventually say good-bye.

Elegant and evocative, The Big House is both magical and sad, a gift to anyone who holds cherished memories of summer.