Showing Blood Washes Blood: A True Story of Love, Murder, and Redemption Under the Sicilian Sun by Frank Viviano 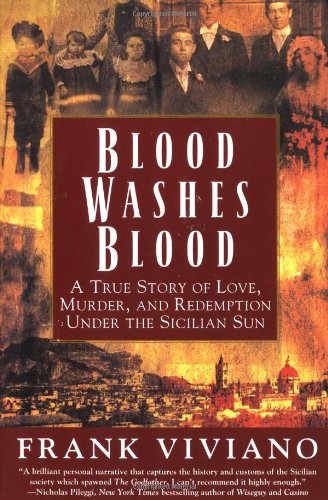 Blood Washes Blood opens promisingly. Francesco "Frank" Viviano is a third-generation Sicilian-American. On his final visit to his 95-year old grandfather in Detroit, he is let into the family secret. Frank's namesake, also known as The Monk, had been murdered in Sicily over a century ago. "How did he die?" Frank asks. "God help me. The boss tell his men to kill him," his grandfather whispers. "The boss, Domenico Valenti." A few months later, his grandfather dies. Sadly, this turns out to be the book¹s high point. Rather than turning into a gripping Mafia read, such as Mario Puzo's The Godfather, Viviano launches into a rather mundane travelogue as he travels back to Sicily to try to piece together the details of The Monk's death. Part of the problem here is that, despite Viviano¹s best efforts, the Monk himself never emerges as anything more than a one-dimensional low-ranking 19th-century Mafioso, which makes the story of only passing interest. The other hurdle is that Viviano's attempts to build suspense are only barely believable. Yes, Palermo is home to the Mafia and, yes, the Mafia are not known for their chattiness. But you can't help feeling that the reason no one is telling Viviano very much about his great-great uncle's death owes less to the omerta and more to the fact that The Monk was a very minor player and it was all such a long time ago that no one really remembers or cares. For Viviano, though, there is a catharsis of sorts in the denouement; for the reader it is more likely to be relief. --John Crace