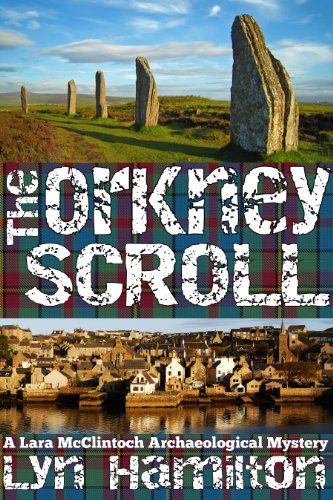 Lara McClintoch’s professional pride is hurt when a writing cabinet she thought was a genuine antique turns out to be a fake. When the antique dealer who sold it for a million dollars is murdered and the money goes missing, Lara follows the forgery trail to Orkney, islands off the northeast coast of Scotland ruled long ago by Viking earls. Amid the peaceful landscape and friendly inhabitants, Lara looks for vindication and finds danger instead.

“With twists, turns and conundra that challenge her readers’ imagination, author Lyn Hamilton deftly combines a contemporary mystery with an ancient Norse saga describing the travels and exploits of a long-dead adventurer known as Bjarni theWanderer and his journey with a valued artifact. As she pursues her quest, Lara [McClintoch]’s life - and those of others engaged in the same odyssey – will be put at risk and more than one victim claimed before the puzzle is solved…. The author skillfully balances two stories, weaving them together as they head towards a compelling climax….it is refreshing to run across a tale with an original story line that carried the reader to new and interesting worlds.” --The Sherbrooke Record

“Hamilton makes the islands of Orkney so beguiling they ought to be listed as a top-ten travel destination.” --Kirkus Reviews

“Lyn Hamilton is emerging as one of Canada’s most successful crime writers. Her series of archeological mysteries featuring Toronto antiques dealer Lara McClintoch has found legions of devoted fans. Her secret? Her ability to take us right to the centre of places that pique the imagination, and then serve up a nice puzzle plot with a dash of arcana for seasoning.” --The Globe and Mail

“This is the most accomplished and clever book yet from a writer who is quickly becoming Canada’s queen of crime fiction.” --Calgary Herald