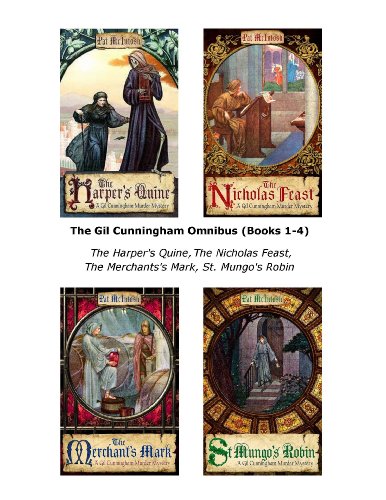 The Harper’s Quine
At the May Day dancing at Glasgow Cross, Gil Cunningham sees not only the woman who is going to be murdered, but her murderer as well. Gil is a recently qualified lawyer whose family still expect him to enter the priesthood. When he finds the body of a young woman in the new building at Glasgow Cathedral he is asked to investigate, and identifies the corpse as the runaway wife of cruel, unpleasant nobleman John Semphill. With the help of Maistre Pierre, the French master-mason, Gil must ask questions and seek a murderer in the heart of the city.

The Nicholas Feast
Glasgow 1492. Gil Cunningham remarked later that if he had known he would find a corpse in the university coalhouse, he would never have gone to the Arts Faculty feast.
In this mysterious adventure Gil Cunningham returns to his old university for the Nicholas Feast, where he and his colleagues are entertained by a play presented by some of the students. One of the actors, William Irvine, is later found murdered and Gil assisted by Alys, begins to disentangle a complex web of espionage and blackmail involving William's tutors and fellow students. Matters are further complicated by the arrival of Gil's formidable mother who is determined to inspect his betrothed. Little do Alys and Gil realise that it will be she who provides the final, vital key to unmask the murderer and lay his motives clear.

The Merchant’s Mark
The barrel should have contained books - instead it held treasure and a severed head...
Gil Cunningham and his old acquaintance, Glasgow merchant Augie Morison, expecting a delivery of books from the Low Countries, report the gruesome substitute to the Provost, and at the inquest the next morning Morison is accused of the murder and imprisoned. He appeals to Gil, who sets out with his friend and future father in law Maistre Pierre, the French master-mason, to find the treasure's owner, trace the barrel and identify the dead man.
The trail they follow leads them from the court of James IV at Stirling via a cooper's yard in Linlithgow, to another death on the bare slopes of the Pentland Hills.

The warden of St Serf's has been found dead in the almshouse garden.
He appears to have been killed on the previous night but there are those who are convinced he was present at that morning's service, The elderly residents, the almshouse nurse and Humphrey, her deranged favourite, have all been set against one another by the dead man's scheming - and then there is the discarded mistress and almshouse ghost to consider.
Tracing the dead man's last movements between the Cathedral precinct and the shores of the Clyde, Gil Cunningham is both helped and hindered by his two sisters who have come to Glasgow for his wedding to Alys. An uncanny event followed by the arrival of Gil's godfather, precipitates the crisis.
Finally, it is Alys who helps Gil identify the warden's killer.