Showing The Ruby in her Navel by Barry Unsworth 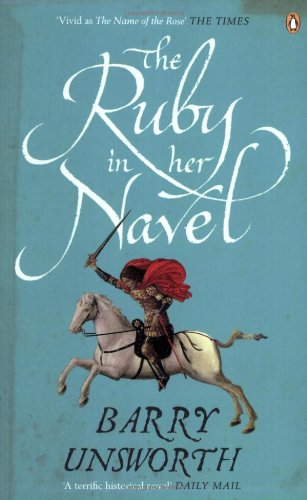 Set in the Middle Ages during the brief yet glittering rule of the Norman kings, The Ruby in Her Navel is a tale in which the conflicts of the past portend the present. The novel opens in Palermo, in which Latin and Greek, Arab and Jew live together in precarious harmony. Thurstan Beauchamp, the Christian son of a Norman knight, works for Yusuf, a Muslim Arab, in the palace's central finance office, a job which includes the management of blackmail and bribes, and the gathering of secret information for the king. But the peace and prosperity of the kingdom is being threatened, internally as well as externally. Known for his loyalty but divided between the ideals of chivalry and the harsh political realities of his tumultuous times, Thurstan is dispatched to uncover the conspiracies brewing against his king. During his journeys, he encounters the woman he loved as a youth; and the renewed promise of her love, as well as the mysterious presence of an itinerant dancing girl, sends him on a spiritual odyssey that forces him to question the nature of his ambition and the folly of uncritical reverence for authority. With the exquisite prose and masterful narrative drive that have earned him widespread acclaim, Barry Unsworth transports the reader to a distant past filled with deception and mystery, and whose racial, tribal, and religious tensions are still with us today. Reading group guide included.