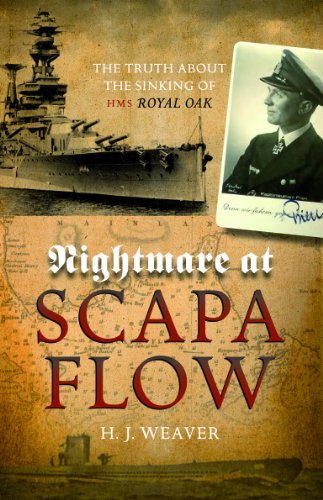 Sinking the battleship HMS Royal Oak in the Royal Navy's home anchorage, with the loss of more than 800 of her crew, was Germany's first shattering blow against Britain in the 1939-45 war. Within six weeks the long-standing German dream of breaching the defences of Scapa Flow had been achieved. Germany claimed the sinking for the submarine U-47, commanded by Lt. Gunther Prien. Prien and his crew became instant folk heroes, lauded, interviewed and exploited to extract the maximum glory from their deed. A few months later, Prien's autobiography, "Mein Weg Nach Scapa Flow", was published and sold an astonishing 750,000 copies. However, there are also Royal Oak survivors who, while accepting that their ship was torpedoed, say: 'Prien and his crew can't ever have seen the inside of Scapa Flow because Prien's story is almost totally at variance with the truth.'Four books and dozens of articles have been written on what is now generally accepted as one of the greatest submarine exploits of all time. Yet nobody has managed to sift fact from falsehood and reconcile the apparently irreconcilable German and British stories. The author has interviewed Royal Oak survivors, members of U-47's 1939 crew, Lt. Prien's widow and members of the firm which published his autobiography. His quest for the truth led through England, Northern Ireland, Wales, Scotland, Orkney, Norway, West Berlin, Cologne, Freiburg and even distant Amman. He has patiently investigated every point of controversy until he was able to set down a documented, definitive account of the Royal Oak naval disaster. It was previously published by Cressrelles Ltd.