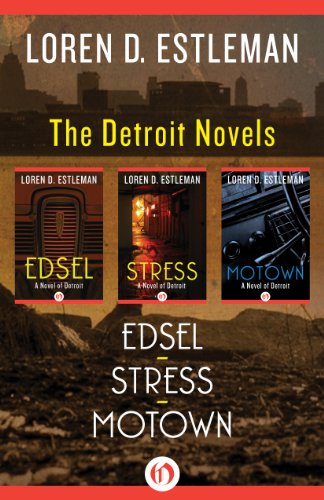 Three of Loren D. Estleman’s thrilling Detroit Novels in one volume
In Edsel, it has only been two decades since Connie Minor was on top, but it feels like centuries. Once a journalist, Minor spent Prohibition with his finger on gangland’s pulse, a confidant of every rumrunner, boss, and triggerman in Detroit. But as the gangsters fell, Minor went with them, replaced by a generation of reporters more interested in the Nazi Party than the inner workings of the Purple Gang. Now it’s the 1950s, and after years writing mindless ad copy, Minor fears that his brain may be permanently atrophied—that is, until an exciting new job drops on his desk. Minor is hired to sell Ford’s most original creation, the Edsel, meant to take America by storm. But the job quickly reintroduces him to some ugly old Detroit faces. When he uncovers a conspiracy, his reporter’s instincts kick in. It’s been years since Minor gabbed with mobsters, but it’s never too late for an old newspaperman to get whacked.
In Stress, for Paul Kubicek and the city of Detroit, 1972 ends in a haze of blood. A police officer in need of extra work, Kubicek spends New Year’s Eve moonlighting as a security guard at an upscale party. Just before midnight, he sees three black men, a shotgun, and a pistol. He takes out the would-be burglars in less than a minute. Only after they are all dead does he realize one man was unarmed. The police department asks Charlie Battle, one of its few African American officers, to head up the investigation into Kubicek’s shooting. As racial tensions threaten to tear Detroit apart, Battle tries to break through the department’s code of silence, fighting for truth in a city where lies are a way of life.
And in Motown, rage simmers beneath the tranquil surface of 1960s Detroit. As the auto industry enjoys its last moments of prosperity, widespread discrimination infuriates the city’s black middle class. One of the most destructive riots of the twentieth century is around the corner, and Rick Amery is going to be right in the middle. A longtime cop forced out of the department on trumped-up graft charges, Amery shares Detroit’s obsession with muscle cars. It was the temptation of a white ’64 Thunderbird that cost him his badge, and it is for the sake of General Motors that he takes his first job as a private investigator, digging up dirt on a consumer advocate who calls GM cars death traps. Amery must work quickly, for no hot rod on Earth is fast enough to outrun the trouble that’s gaining on the Motor City.