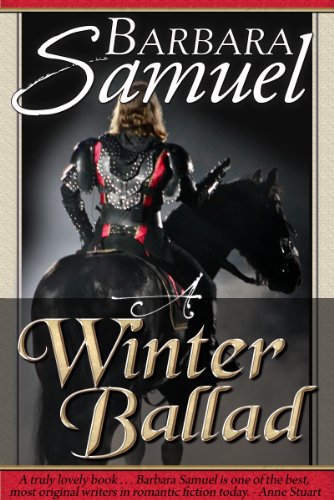 Anya of Winterbourne had suffered nothing but humiliation at the hands of men. And yet when she found a fallen knight in a still winter forest, she could not leave him to die.

Weary of battle and pursued by assassins, Christian de Moreerx would have liked nothing more than to stay at Winterbourne and champion the elusive and beleaguered Lady Anya. But his past contained a secret he had to decipher if he was to live, and his presence could only bring more disaster to the manor.

A GREAT AND DANGEROUS GAME

To thwart their separate enemies, Lady Anya and her broken knight battle virulent forces and face death itself to win the love that would long be sung by troubadours as... A WINTER BALLAD

The men carried the knight to a chamber behind the Great Hall, close to the hearth, where it was warm and dry. They settled him on a straw mattress, then stood waiting. Anya dismissed them, except Geoffrey, whom she sent to the kitchens for the supplies she needed.

The dog crept in, head down, and when Anya didn't shout at him, slunk close to the knight's feet. "I fear your master has little time left to him," she said as she began to remove the hauberk and mail, gently as she was able. The knight groaned softly, shifting away from her hands. His flesh burned with fever, and Anya could smell the sour odor of illness about him.

A little pluck of regret touched her. The lean body, muscled and hard beneath his clothes, matched the extraordinary handsomeness of his face, visible even through the grime and bruises and days' worth of unshaven beard. She pressed her fingers to the high brow. "How long did you lie there?" she asked, knowing he could not hear. "How came you to our forest?"

A maidservant appeared with a bucket of water and strips of cloth. She set them beside Anya with a grunt, and her attention fell to the knight, naked on the straw mattress. A quiet murmur of surprise and pleasure escaped her mouth.

Anya looked at the girl, and caught the greedy gleam in her eye. "I will call you, Tillie, if needs be."

Left alone, Anya dipped her cloth in the warm water and began to wash the sweat and heat from the knight's body. First his face, so bruised and battered. One eye was swollen and a gash marked his jaw. She paused to look at the wound, but found it mending already beneath the caked blood. His lips were cracked, too, as if from thirst. He must have lain in the forest, wounded this way, for at least a day and a night.

Her estimate of his chances of survival plummeted again. The head wound was deep and oozed with a muckish substance, but even it was not the worst of his injuries. She had prayed the shoulder had only slipped from its joint. Once she removed the mail, it was plain the bone above his chest was broken, and a great red bruise marked the place, as if he'd been given a blow.

Puzzled, she examined him more closely. Bruises marked him head to toe, darkest around his hips and legs. It seemed he had been beaten fiercely. Perhaps he'd been set upon by the bandits who owned the forest?
At his wrists, raw red rings marred the flesh—the marks of binding. One finger was swollen at the joint, and when she probed it, she found another small break.

Pursing her lips, she glanced at the dog, and suddenly wondered if its fear meant it, too, had been beaten. "Come here, my little friend."

The beast whined and, tail down, crossed the floor. Gently, Anya stroked him, feeling the long sinews of his body below oily gray-and-black fur. Her hand grazed a lump on his side, and the dog yelped, turning to nearly bite her. She rubbed his ears in apology. "They beat him senseless and kicked you aside, I think."