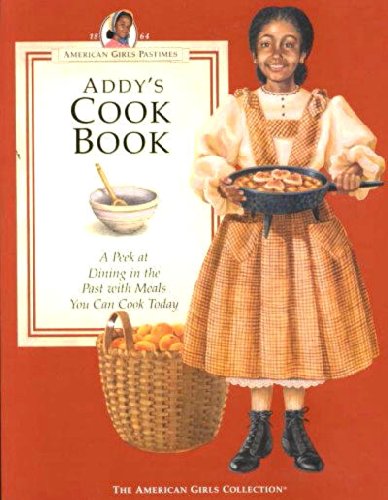 This slender, themed cookbook is historically accurate, thoroughly researched, and well documented. Evert ties the information and recipes to events in the "Addy" books, which revolve around a girl who, with her mother, escaped from slavery. Recipes are well illustrated with full-color drawings and photographs, and methods are clearly described. Addy's favorites, such as chicken shortcake, collard greens, cornbread, potato salad, lemonade, peach cobbler, pound cake, and shortbread are included, as well as other Southern classics such as grits, buttermilk biscuits (made with lard), with gravy and fried apples. Dinners are heavy on bacon. Every page includes a factoid from the time period, augmented by archival black-and-white photographs. Descriptions of an Emancipation Celebration and a Juneteenth Party appear at the end of the book, along with suggested games, foods, table settings, clothing, decorations, and music. (Juneteenth, also known as Freedom Day or Emancipation Day, is a holiday that commemorates the announcement of the abolition of slavery in the U.S. Traditions include public readings of the Emancipation Proclamation, singing traditional songs such as "Swing Low, Sweet Chariot" and "Lift Every Voice and Sing", and readings by African American writers such as Maya Angelou and Ralph Ellison, sometimes include parades, rodeos, street fairs, cookouts, family reunions, park parties, historical reenactments, or Miss Juneteenth contests). This is a faithful description of dishes of the late 1800s and a wonderful asset to historical cooking sections. (With excerpts, Copyright 1995 Reed Business Information, Inc.)