Showing Searching for America's Heart: RFK and the Renewal of Hope by Peter Edelman 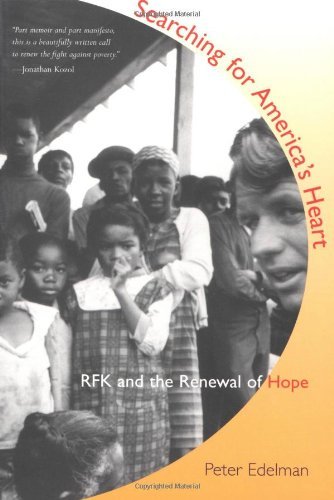 The New York Times Book Review said that Peter Edelman adheres "to a high-minded worldview" -- and he does not hesitate to emphasize that in the Preface to this new paperback edition of Searching for America's Heart by declaring, "I have one voice, but for my part, I will continue to speak what I believe to be the truth."

The truth is -- from the time Edelman was a close aide to RFK, to when he resigned from the Clinton Administration in protest over the latter's welfare bill (which ended a sixty year federal commitment to poor children) -- poverty continues to be a source of shame to the richest nation on earth. Fueled by a vision of economic justice he shared with Robert Kennedy, related here, he advocates an active federal government in correcting inequities in American life. Based partly on initiatives begun by Kennedy, he advocates government support for school reform and more community-based economic development initiatives.

Peter Edelman is one of those rare beings in public and political life: a man not only with a conscience, but also with a vision, and the eloquence to speak out for the poor -- and the children in poverty -- among us.