Showing The Cliveden Set: Portrait of an Exclusive Fraternity by Norman Rose 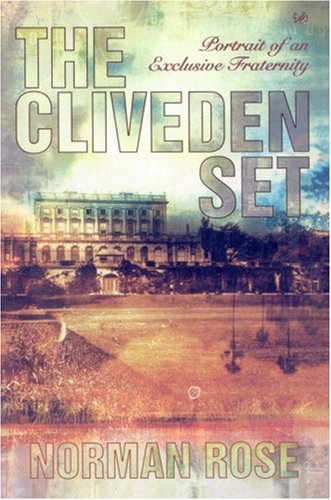 Overlooking the Thames near Maidenhead lies the Cliveden estate, with its Italianate buildings and beautiful, ornate gardens. Today Cliveden is partly managed by the National Trust, but in the appeasement crisis of the late 1930s the "Cliveden set" became a byword for the anti-national and pro-Hitler sentiment associated with the Astor family who had owned Cliveden since 1893. As Norman Rose shows in his carefully researched and fair-minded study of Nancy Astor and her circle of friends, the "set" was no more doctrinaire in its appeasement than many other movers and shakers in British diplomatic circles in the inter-war years. What he reveals instead is a group of like-minded politicians, financiers, journalists and academics, concerned above all with maintaining the integrity of the British empire. In an age of militaristic nationalism, men such as Lord Lothian (eventually British Ambassador to Washington), and Geoffrey Dawson (editor of the Times), looked to Anglo-Saxon union as a means of international peace. For nearly 40 years Nancy and Waldorf Astor, together with an army of servants, played hosts to these men and their concerns, creating an alternative power-base to Westminster--a political salon the like of which had not been seen since the heyday of Holland House in the 1830s. --Miles Taylor