Showing These Twain by Arnold Bennett 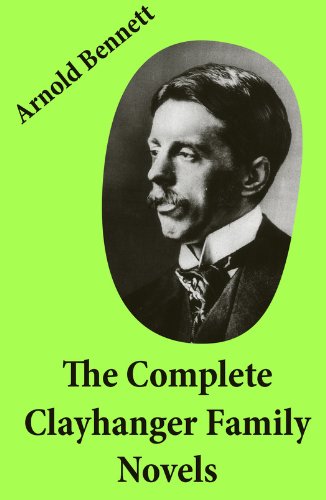 This carefully crafted ebook: "The Complete Clayhanger Family Novels (Clayhanger + Hilda Lessways + These Twain + The Roll Call)" is formatted for your eReader with a functional and detailed table of contents. This ebook is acollection of series of novels by Arnold Bennett, published between 1910 and 1918. Though the series is commonly referred to as a "trilogy", it actually consists of four books; the first three novels were released in one single volume as The Clayhanger Family in 1925.

The books are set in Bennett's usual setting of "the 5 Towns", a thinly-disguised version of the six towns of "the Potteries" which amalgamated (at the time of which Bennett was writing) into the borough of Stoke-on-Trent. Buildings described in the novels are still identifiable in Burslem.

The novels are a coming-of-age story set in the Midlands of Victorian England, following Edwin Clayhanger as he leaves school, takes over the family business, and falls in love.

The second book was Hilda Lessways, which paralleled Edwin Clayhanger's story from the point of view of his eventual wife, Hilda.

These Twain, the third in the Clayhanger series, chronicles the married life of Edwin and Hilda. Edwin, now released from the controlling influence of his father, finds himself free to run his business and his life, a freedom that is diminished by his wife's caprices.

The fourth book, ''The Roll-Call'', concerns the young life of Clayhanger's stepson, George.

George Edwin Cannon - he soon drops the surname Clayhanger, given to him upon his mother's marriage - is an architect, and represents what his stepfather Edwin Clayhanger wished to become.The characters of Edwin and Hilda are not developed further in this book: Edwin - now elevated to Alderman - appears only briefly.

The central character displays an unattractive arrogance because of the wealth behind him. In an early chapter, he thinks about adding electric light to his London dwelling, and decides that he - or rather, his stepfather - can well afford it. Bennett seems to have felt that the children of the successful bourgeoisie, unless their excesses are suppressed as Edwin's were, will become spoilt.


Arnold Bennett (1867-1931) was an English journalist, novelist, and writer. After working as a rent collector and solicitor's clerk, Bennett won a writing contest which...