Showing After the Armistice Ball by Catriona McPherson 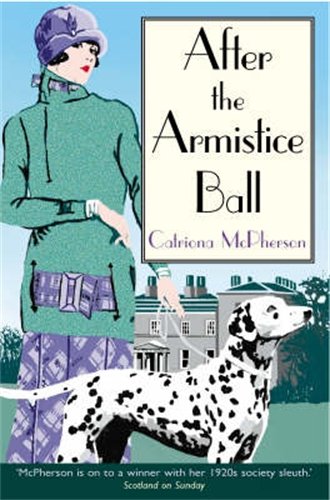 A classic murder-mystery set among the struggling upper classes of 1920s Perthshire as, in the aftermath of the First World War, their comfortable world begins to crumble.

Dandy Gilver, her husband back from the War, her children off at school and her uniform growing musty in the attic, is bored to a whimper in the spring of 1923 and a little light snooping seems like harmless fun. Before long, though, the puzzle of what really happened to the Duffy diamonds after the Armistice Ball has been swept aside by a sudden, unexpected death in a lonely seaside cottage in Galloway. Society and the law seem ready to call it an accident but Dandy, along with Cara Duffy's fiancé Alec, is sure that there is more going on than meets the eye.

What is being hidden by members of the Duffy family: the watchful Lena, the cold and distant Clemence and old Gregory Duffy with his air of quiet sadness, not to mention Cara herself whose secret always seems just tantalizingly out of view? Dandy must learn to trust her instincts and swallow most of her scruples if he is to uncover the truth and earn the right to call herself a sleuth.