Showing Breakfast in Brighton: Adventures on the Edge of England by Nigel Richardson 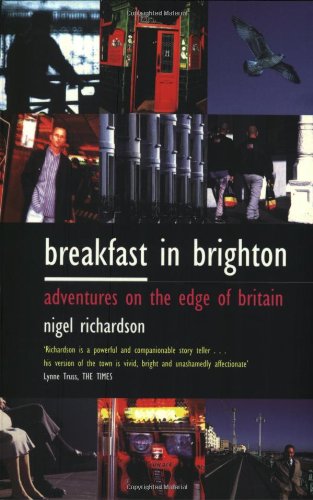 Brighton, the "antithesis of England" as Nigel Richardson describes it towards the beginning of his lyric to a unique town, Breakfast in Brighton: Adventures on the Edge of Britain. On the edge of England, certainly--Richardson makes much of his sea- front garret in a Regency square, café and pub life by the sea--but also Brighton as a place to live "on the edge": Richardson's Brighton is as much a state of mind as a geographical space, a refuge from the banality of everyday life. It's a fascinating tale, drawing on various real and mythic moments in Brighton's past (the Brighton Trunk Murders, the filming of Brighton Rock, the "Sea Monster" dredged up by fishermen in the mid-19th century) as well as the story of the painting which haunts this book: "Breakfast in Brighton", painted around 1950 by Edward le Bas. Inviting his readers to join him in his (visitor's) homage to the diversity, and exuberance, of the cultures around him-- "Brighton has a rare genius for moving with the times yet remaining the same", he muses on his journey through the North Laines--Richardson casts himself as a modern day flaneur, a man on the track of the history embedded in the fabric, and spectacle, of urban life. --Vicky Lebeau