Showing The Forty Days of Musa Dagh by Franz Werfel 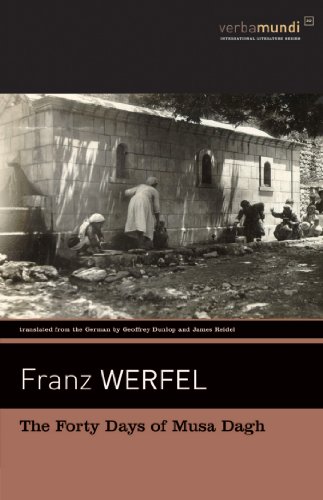 The Forty Days of Musa Dagh is Franz Werfel's masterpiece that brought him international acclaim in 1933, drawing the world's attention to the Armenian genocide. This is the story of how the people of several Armenian villages in the mountains along the coast of present-day Turkey and Syria chose not to obey the deportation order of the Turkish government. Instead, they fortified a plateau on the slopes of Musa Dagh—Mount Moses—and repelled Turkish soldiers and military police during the summer of 1915 while holding out hope for the warships of the Allies to save them.

The original English translation by Geoffrey Dunlop has been revised and expanded by translator James Reidel and scholar Violet Lutz. The Dunlop translation, had excised approximately 25% of the original two-volume text to accommodate the Book-of-the-Month club and to streamline the novel for film adaptation. The restoration of these passages and their new translation gives a fuller picture of the extensive inner lives of the characters, especially the hero Gabriel Bagradian, his wife Juliette, their son Stephan—and Iskuhi Tomasian, the damaged, nineteen-year-old Armenian woman whom the older Bagradian loves. What is more apparent now is the personal story that Werfel tells, informed by events and people in his own life, a device he often used in his other novels as well, in which the author, his wife Alma, his stepdaughter Manon Gropius, and others in his circle are reinvented. Reidel has also revised the existing translation to free Werfel's stronger usages from Dunlop's softening of meaning, his effective censoring of the novel in order to fit the mores and commercial contingencies of the mid-1930s.