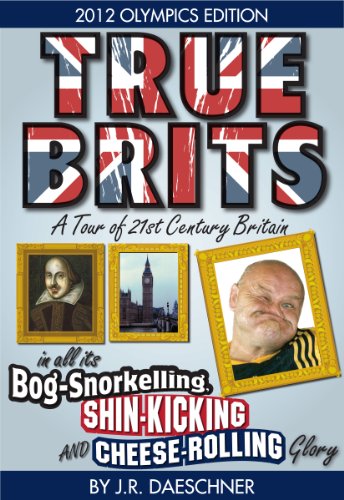 Should shin kicking be an Olympic sport?

Believe it or not, 400 years before the London 2012 Olympics, the English were the world's sole guardians of the Olympic flame, with their very own country 'Olimpicks' featuring shin kicking and other 'games.'

When J.R. Daeschner first heard about 'shin kicking,' he was astounded. As an American who had lived in Britain for some time, he thought he knew a thing or two about the country. But he'd never come across this 'sport,' which had to be one of the most painful and infuriating ever invented. J.R. soon discovered that Britain has dozens of similar acts of lunacy enshrined as traditions: strange-named events such as cheese rolling, gurning, and bog snorkelling.

TRUE BRITS is a funny and fascinating trek around Britain, following J.R. as he meets some of the great British eccentrics who hurl theselves down a grassy cliff in pursuit of a cheese, coat themselves in prickly green burrs and prance around with reindeer antlers on their heads. In an attempt to understand why seemingly ordinary people do such extraordinarily strange things, J.R. talks to countless characters, watches them in action, and even participates in many of the events himself--encountering plenty of occupational hazards along the way.

This updated ebook includes the 'author's edition' of TRUE BRITS, plus an entire book's worth of bonus bits that wouldn't fit within the confines of the original print version, including: an interview about Pope burning with Ian Paisley, the 'Dr. No' of Northern Ireland; the story of the secret government autopsies done on Sellafield workers in the home of gurning; the connection between Robinson Crusoe and shin kicking; and the unlikely link between cheese rolling and the invention of the first vaccine.

And, of course, the story of how England's Cotswold 'Olimpicks' inspired the modern Olympian Games.

"An obsessive, down-and-dirty travelogue... Daeschner's forays into cussed British culture blur the lines between past and present. And his plunging into the bog to witness tradition in the making means we don't have to. He clearly passes the dope test."
—TIME Magazine

"Daeschner travels the United Kingdom in search of all things eccentric and extraordinary.... In his world, this is certainly cause for celebration."
—BOOKPAGE

"Absurd yet intriguing... An insightful travel narrative in the tradition of Bill Bryson's Notes from a Small Island."
—THE LIBRARY JOURNAL

"A charming, affectionate, and hilarious book."
—A COMMON READER

"In The Ordeal of Young Tuppy, PG Wodehouse describes a football game between two villages... JR Daeschner, an American who has lived here for 10 years, writes vividly about the real thing."
—THE INDEPENDENT

"This book is so good, you can open it anywhere and find something interesting."
—LBC RADIO, James O'Brien

"A mix of humorous anecdote and interesting analysis, True Brits has obvious appeal."
—THE BOOKSELLER

"JR comes across as a genuine inquisitor, willing to risk acute embarrassment and injury for the chance to experience a piece of British eccentricity ... a suprisingly enjoyable read."
—WANDERLUST MAGAZINE

"JR is just about stupid enough to be an honorary Brit."
—BBC RADIO