Showing Much Ado About Nothing by William Shakespeare 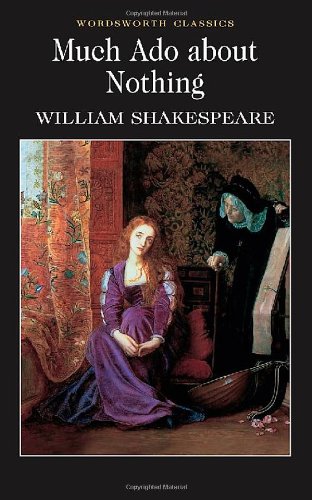 Like Love's Labour's Lost, Much Ado about Nothing shows Shakespeare moving into a more complex and darker terrain through his exploration of an apparently harmless comical romance. The play revolves around the adventures of the two gallants Claudio and Benedick at the court of Sicily. Claudio falls in love with the governor's daughter Hero, and is eager for his more misanthropic friend Benedick to also find love. Benedick is introduced to the fiery, independent Beatrice, and sparks soon fly as they banter with each other in a more wittier version of Kate and Petruchio in The Taming of the Shrew. Beatrice has some wonderful ripostes to marriage asking why should a woman marry "a clod of wayward marl", whilst Benedick grumbles that "She speaks poniards and every word stabs". Meanwhile, the jealous Don John convinces Claudio that Hero has in fact been unfaithful to him. When Claudio rejects Hero on their wedding day, she faints and is taken for dead. In the hectic final scenes the play moves towards reconciliation between Claudio and Hero, and the tentative admission of the love between Benedick and Beatrice. Famously filmed by Kenneth Branagh in the Tuscan countryside with a cast that included Keanu Reeves, Much Ado about Nothing remains one of Shakespeare's most successful comedies. --Jerry Brotton.