Showing The Adept by Katherine Kurtz 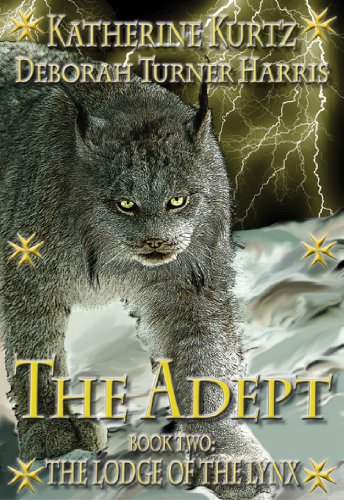 He is eternal, but so are his foes. Through countless lives and eras, The Adept has fought the powers of Darkness. Now, as psychiatrist Adam Sinclair, he leads his loyal Hunstmen against supernatural evil in all all its myriad forms.

But the Darkness is striking back—in the guise of an unholy cult long thought to be extinct. Endowed with the elemental energy of an ancient Druidic artifact and forbidden Nazi black magic, the Lodge of the Lynx stands ready to unleash destruction on Sinclair, his allies, and, ultimately, all of Scotland.

The game is afoot for the Adept and his Hunt ... but this time, their enemies are also hunting them!

A low growl of thunder rolled hollowly across the lawn, accompanied by a more defined crackle of lightning within the roiling clouds. The brief flare picked out two more figures in battledress uniform as they hurried out onto the grass from the shadows of the building, eyes turned skyward under uniform berets.
“Oi! Archie! D’ye see that?” one of them yelled. “Where did all these clouds come from?”
Before Archie could venture a response, an eye-searing bolt of bright-white lightning ripped the sky above the castle roof, accompanied by a deafening crack of thunder. The lightning bolt struck the north turret of the great square tower with the force of a mortar round, hurling stones and roof slates up and outward in a blazing fountain of destruction . . .