Showing The Unfortunates by B. S. Johnson 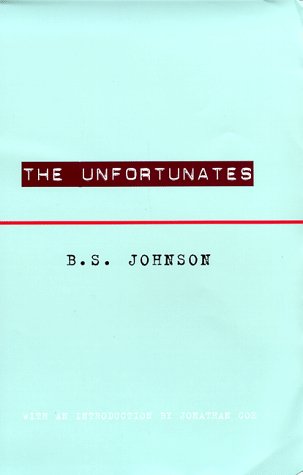 BS Johson's infamous book-in-a-box is, if remembered at all, notorious for its presentation rather than its content. The "book" consists of a first and last section plus 25 other chapters, each one coming as a self-contained "pamphlet", that can be read in any order the reader likes. The subject matter concerns a journalist's day covering a football match in Nottingham, remembering previous times spent in the city with a lover now gone and a friend now dead. The innovative format permits Johnson to echo the random thought processes of his protagonist--the associations and reminiscences bubbling up in no fixed order as he walks through the city, watches and reports on the match and returns home afterwards.

However, it is the quality of the writing and the affecting, deeply personal narrative that should be stressed, and is so often forgotten, when discussing Johnson's most moving work. Jonathan Coe's informative introduction explains the origins of this (semi-)autobiographical work and situates it as a forerunner to hugely successful books by the likes of Ruth Picardie and John Diamond. Certainly this conveys what an emotionally engaged book The Unfortunates is, and is a useful rejoinder to the barely veiled negativism of the charge of being avant-garde, but it doesn't place Johnson alongside the peers with whom he should be judged. Johnson is a writer in the league of Beckett and William S Burroughs, an experimentalist but one whose humanity, and sheer skill, shine through. The Unfortunates, the book he wrote as a response to his friend Tony Tillinghast's death, on the back of a promise to him to "get it all down, mate," is a wonderfully honest book about friendship and loss. That it comes in a box should not blind us to the fact that as a writer Johnson was peerless and as a novel this is truly first-rate. --Mark Thwaite