Showing Mary Queen of Scotland and the Isles by Stefan Zweig 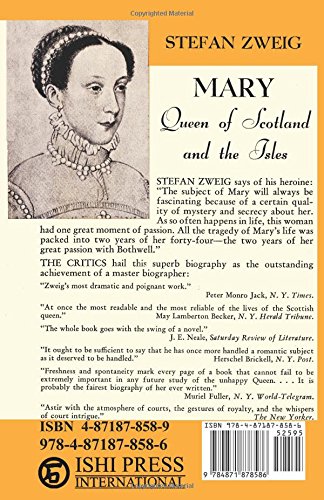 She was born to be Queen of Scotland, she was briefly the Queen of France and she had a claim to being Queen of England, which resulted in her having her head chopped off. They chopped off her head after she was found guilty of conspiring to have Queen Elizabeth (1533-1603) assassinated so that she could take power. Had she not been executed, she would eventually have become Queen of England when Elizabeth died. That was only one of the many controversies in which she was involved. Her first husband, who became the King of France, making her the Queen, died shortly thereafter and her second husband was found murdered, apparently strangled. Mary Queen of Scots (1542-1587) was believed to have been complicit in that murder. This widely acclaimed biography by Stefan Zweig is regarded as the best of the many biographies of this famous woman. The great thing about the author, Stefan Zweig, is that his biographies are smooth and easy to read. By contrast, there is a weighty tome with exactly the same title but 880 pages long. Here in 386 easy to read pages you can learn everything about Mary Queen of Scots that you will probably ever want to know.