Showing Heads of families at the First Census of the United States taken in the year 1790. Connecticut by United States Bureau of * 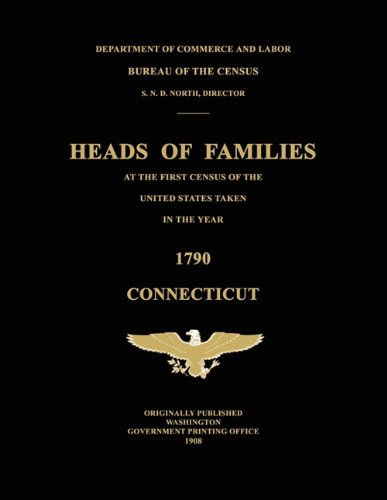 The First Census of the United States (1790) comprised an enumeration of the inhabitants of the present states of Connecticut, Delaware, Georgia, Kentucky, Maine, Maryland, Massachusetts, New Hampshire, New Jersey, New York, North Carolina, Pennsylvania, Rhode Island, South Carolina, Tennessee, Vermont, and Virginia. Unfortunately, during the War of 1812, when the British burned the Capitol at Washington, the returns for Delaware, Georgia, Kentucky, New Jersey, Tennessee, and Virginia were destroyed. For Virginia, however, taxpayer lists were published in an attempt to partially reconstruct the original returns. Fortunately, the census records for Connecticut survived and were available for this 1908 publication. In March 1790, Connecticut had a population of 237,946, out of a total population of approximately 3,920,000. The information provided in this census includes the Name of Head of Family, the number of free white males of 16 years and upward in the household, the number of free white males and under living in the household, the number of free white females, all other free persons, and the number of slaves. Populations are also recorded for Towns and Counties.