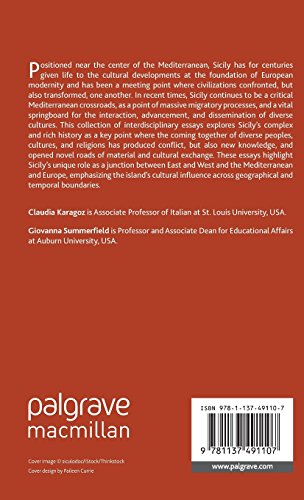 Positioned near the center of the Mediterranean, Sicily has for centuries given life to the cultural developments at the foundation of European modernity and has been a meeting point where civilizations confronted, but also transformed one another. In recent times, Sicily continues to be a critical Mediterranean crossroads, as a point of massive migratory processes, and a vital springboard for the interaction, advancement, and dissemination of diverse cultures. This collection of interdisciplinary essays explores Sicily's complex and rich history as a key point where the coming together of diverse peoples, cultures, and religions has produced conflict, but also new knowledge, and opened novel roads of material and cultural exchange. These essays highlight Sicily's unique role as a junction between East and West and the Mediterranean and Europe, emphasizing the island's cultural influence across geographical and temporal boundaries.