Showing Dark Money: The Hidden History of the Billionaires Behind the Rise of the Radical Right by Jane Mayer 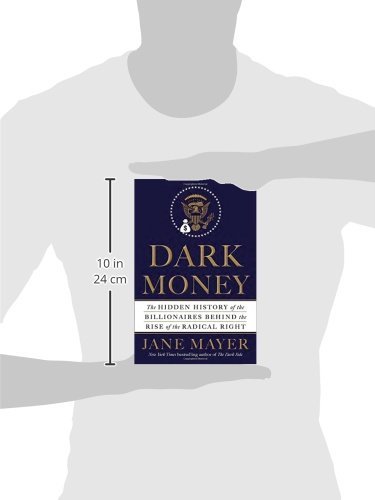 Why is America living in an age of profound economic inequality? Why, despite the desperate need to address climate change, have even modest environmental efforts been defeated again and again? Why have protections for employees been decimated? Why do hedge-fund billionaires pay a far lower tax rate than middle-class workers? The conventional answer is that a popular uprising against big government led to the ascendancy of a broad-based conservative movement. But as Jane Mayer shows in this powerful, meticulously reported history, a network of exceedingly wealthy people with extreme libertarian views bankrolled a systematic, step-by-step plan to fundamentally alter the American political system. The network has brought together some of the richest people on the planet. Their core beliefs that taxes are a form of tyranny; that government oversight of business is an assault on freedom are sincerely held. But these beliefs also advance their personal and corporate interests: Many of their companies have run afoul of federal pollution, worker safety, securities, and tax laws. The chief figures in the network are Charles and David Koch, whose father made his fortune in part by building oil refineries in Stalin s Russia and Hitler s Germany. The patriarch later was a founding member of the John Birch Society, whose politics were so radical it believed Dwight Eisenhower was a communist. The brothers were schooled in a political philosophy that asserted the only role of government is to provide security and to enforce property rights. When libertarian ideas proved decidedly unpopular with voters, the Koch brothers and their allies chose another path. If they pooled their vast resources, they could fund an interlocking array of organizations that could work in tandem to influence and ultimately control academic institutions, think tanks, the courts, statehouses, Congress, and, they hoped, the presidency. Richard Mellon Scaife, the mercurial heir to banking and oil fortunes