Showing They All Love Jack: Busting the Ripper by Bruce Robinson 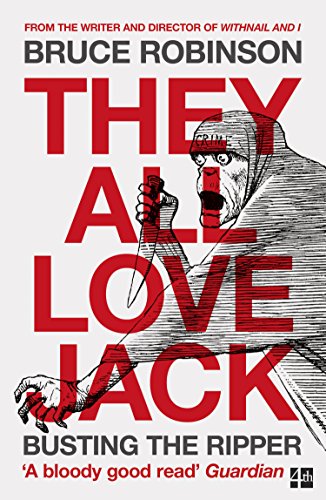 LONGLISTED FOR THE SAMUEL JOHNSON PRIZE FOR NON-FICTION

A book like no other – the tale of a gripping quest to discover the identity of history’s most notorious murderer and a literary high-wire act from the legendary writer and director of Withnail and I.

For over a hundred years, ‘the mystery of Jack the Ripper’ has been a source of unparalleled fascination and horror, spawning an army of obsessive theorists, and endless volumes purporting finally to reveal the identity of the brutal murderer who terrorised Victorian England.

But what if there was never really any ‘mystery’ at all? What if the Ripper was always hiding in plain sight, deliberately leaving a trail of clues to his identity for anyone who cared to look, while cynically mocking those who were supposedly attempting to bring him to justice?

In THEY ALL LOVE JACK, the award-winning film director and screenwriter Bruce Robinson exposes the cover-up that enabled one of history’s most notorious serial killers to remain at large. More than twelve years in the writing, this is much more than a radical reinterpretation of the Jack the Ripper legend, and an enthralling hunt for the killer. A literary high-wire act reminiscent of Tom Wolfe or Hunter S. Thompson, it is an expressionistic journey through the cesspools of late-Victorian society, a phantasmagoria of highly placed villains, hypocrites and institutionalised corruption.

Polemic, forensic investigation, panoramic portrait of an age, underpinned by deep scholarship and delivered in Robinson’s inimitably vivid and scabrous prose, THEY ALL LOVE JACK is an absolutely riveting and unique book, demolishing the theories of generations of self-appointed experts – the so-called ‘Ripperologists’ – to make clear, at last, who really did it; and more importantly, how he managed to get away with it for so long.