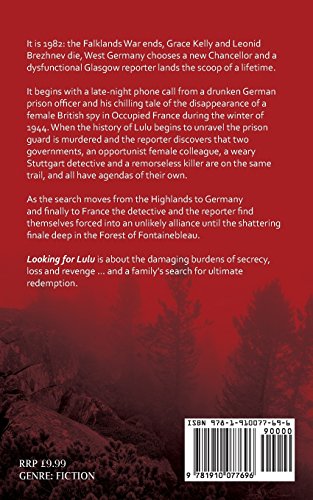 The Falklands War ends, Natalie Wood and Leonid Brezhnev die, West Germany chooses a new Chancellor and Time magazine selects the computer as Machine of the Year. In the same year, a dysfunctional Glasgow newspaperman tapes a late-night conversation with a drunken German prison officer who, within a few days, is murdered. When the victim's chilling tale of a wartime British spy called Lulu begins to unravel the reporter knows he has stumbled on the scoop of a lifetime. But two governments, an opportunist female colleague, a weary Stuttgart detective and a remorseless killer are on the same trail, and all have agendas of their own. As the search moves from Scotland to Germany and France the detective and the reporter - two men who are worlds apart - are forced into an unlikely alliance until the shattering finale in the Forest of Fontainebleau. Looking for Lulu is a story about the double burden of secrecy and loss and a family's search for ultimate redemption.