Showing Sicily: An Island at the Crossroads of History by John Julius Norwich 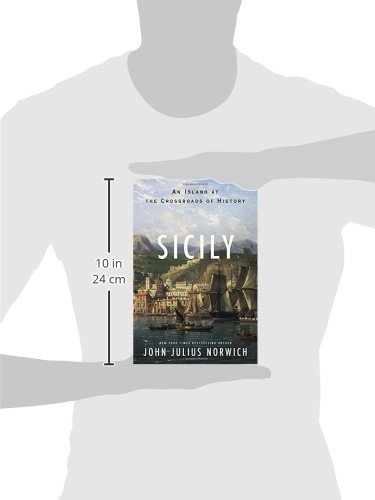 Critically acclaimed author John Julius Norwich weaves the turbulent story of Sicily into a spellbinding narrative that places the island at the crossroads of world history. Sicily, said Goethe, is the key to everything. It is the largest island in the Mediterranean, the stepping-stone between Europe and Africa, the link between the Latin West and the Greek East. Sicily s strategic location has tempted Roman emperors, French princes, and Spanish kings. The subsequent struggles to conquer and keep it have played crucial roles in the rise and fall of the world s most powerful dynasties. Yet Sicily has often been little more than a footnote in books about other empires. John Julius Norwich s engrossing narrative is the first to knit together all of the colorful strands of Sicilian history into a single comprehensive study. Here is a vivid, erudite, page-turning chronicle of an island and the remarkable kings, queens, and tyrants who fought to rule it. From its beginnings as a Greek city-state to its emergence as a multicultural trading hub during the Crusades, from the rebellion against Italian unification to the rise of the Mafia, the story of Sicily is rich with extraordinary moments and dramatic characters. Writing with his customary deftness and humor, Norwich outlines the surprising influence Sicily has had on world history the Romans fascination with Greek civilization dates back to their sack of Sicily and tells the story of one of the world s most kaleidoscopic cultures in a galvanizing, contemporary way. This volume has been a long time coming Norwich began to explore Sicily s colorful history during his first visit to the island in the early 1960s. The dean of popular historians leads his readers through the millennia with the steady narrative hand of a master teacher or the world s most learned tour guide. Like the island itself, "Sicily" is a book brimming with bold flavors that begs to be revisited again and again. Praise for "Sicily" Suavely readable . .