Showing The Measure of Darkness by Liam Durcan 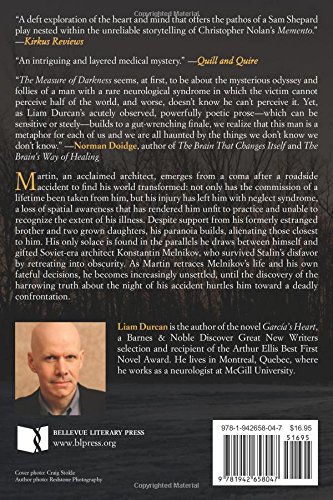 A deft exploration of the heart and mind that offers the pathos of a Sam Shepard play nested within the unreliable storytelling of Christopher Nolan s "Memento." "Kirkus Reviews" Martin, an acclaimed architect, emerges from a coma after a roadside accident to find his world transformed: not only has the commission of a lifetime been taken from him, but his injury has left him with neglect syndrome, a loss of spatial awareness that has rendered him unfit to practice and unable to recognize the extent of his illness. Despite support from his formerly estranged brother and two grown daughters, his paranoia builds, alienating those closest to him. His only solace is found in the parallels he draws between himself and gifted Soviet-era architect Konstantin Melnikov, who survived Stalin s disfavor by retreating into obscurity. As Martin retraces Melnikov s life and his own fateful decisions, he becomes increasingly unsettled, until the discovery of the harrowing truth about the night of his accident hurtles him toward a deadly confrontation. A gripping journey into the depths of a fractured mind, "The Measure of Darkness" is ultimately a resonant tale of resilience and healing. Liam Durcan is the author of "Garcia s Heart," winner of the Arthur Ellis Best First Novel Award. He lives in Montreal, Quebec, where he works as a neurologist at McGill University."