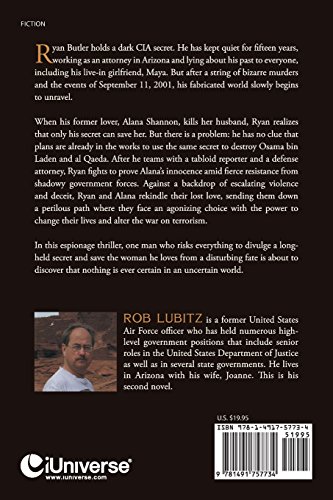 Ryan Butler holds a dark CIA secret. He has kept quiet for fifteen years, working as an attorney in Arizona and lying about his past to everyone, including his live-in girlfriend, Maya. But after a string of bizarre murders and the events of September 11, 2001, his fabricated world slowly begins to unravel. When his former lover, Alana Shannon, kills her husband, Ryan realizes that only his secret can save her. But there is a problem: he has no clue that plans are already in the works to use the same secret to destroy Osama bin Laden and al Qaeda. After he teams with a tabloid reporter and a defense attorney, Ryan fights to prove Alana's innocence amid fierce resistance from shadowy government forces. Against a backdrop of escalating violence and deceit, Ryan and Alana rekindle their lost love, sending them down a perilous path where they face an agonizing choice with the power to change their lives and alter the war on terrorism. In this espionage thriller, one man who risks everything to divulge a long-held secret and save the woman he loves from a disturbing fate is about to discover that nothing is ever certain in an uncertain world.