Showing The Queen, Her Lover and the Most Notorious Spy in History by Roland Perry 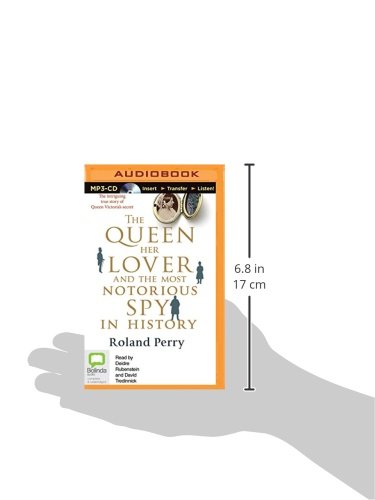 The intensely revealing and entertaining account of a great royal secret and hidden love story—an unbuttoned history of Queen Victoria's loves and intrigues.

Long before her successful marriage to Prince Albert, Princess Victoria had an affair with the dashing Scottish 13th Lord Elphinstone. After the liaison was exposed, Elphinstone was banished to India, appointed Governor of Madras, which allowed Victoria's mother to engineer a royal union for her with Prince Albert of Saxe-Coburg. After five years of pining for Elphinstone, Victoria finally gave in and married Albert.

Despite a successful marriage, Victoria never forgot Elphinstone and after a decade in India he returned to her side as Lord-in-Waiting at Court. He only left her to take up the critical role of Governor of Bombay during the Indian Uprising of 1857. Elphinstone died soon after in June 1860 from a fever.

Many attempts were made to bury the memory of Lord Elphinstone, his long-running relationship with the monarch and his grand service for the Empire, but Victoria recorded it in letters to her confidant, her first-born, the Princess Royal: "Vicky." The revealing correspondence, like a ticking time-bomb, sat in a German castle attic until 1945 when King George VI, Victoria's great-grandson, sent a courtier, MI5 operative Anthony Blunt, on seven special missions to gather the letters.