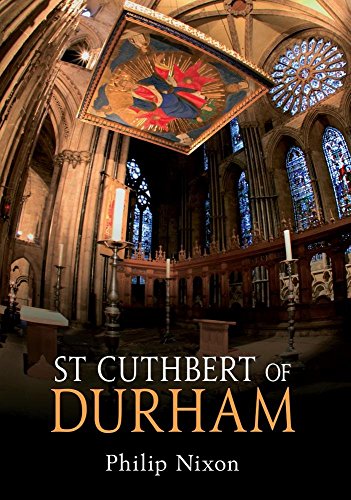 Saint Cuthbert, the best-loved Northern saint, was born in the early seventh century and lived during an exciting and mysterious time in the history of Northumbria. During his life he had connections with many places - the Lammermuir Hills, Melrose, Ripon in North Yorkshire, the Farne Islands, Whitby, Carlisle, Coldingham, Coquet Island and Lindisfarne - where he served both as prior and bishop. He made many excursions into wild Northumbria to spread the word of Christianity. Cuthbert died on Inner Farne on 20 March 576 AD but his fame did not end there. Eleven years after his death his body was found to be incorrupt. Lindisfarne became a place of pilgrimage - the Lindisfarne Gospels were produced in his honour and his great following further developed. He had prophesied the Viking invasion that made the monks of Lindisfarne take his coff and flee the island to wander for seven years. They eventually settled in Chester-le-Street, near Durham, for over a hundred years until they fled from the Vikings again - this time to Ripon. On their return they found the island peninsula of Durham, and this was chosen as the final resting place for St Cuthbert.Eventually the Normans built the magnificent Durham Cathedral, now a World Heritage Site, to house his tomb. His cult following was as great as that of Thomas Becket. In this lavishly illustrated history of St Cuthbert, Philip Nixon guides the reader through the scenery and architecture that formed the backdrop to the saint's life, work and legacy.