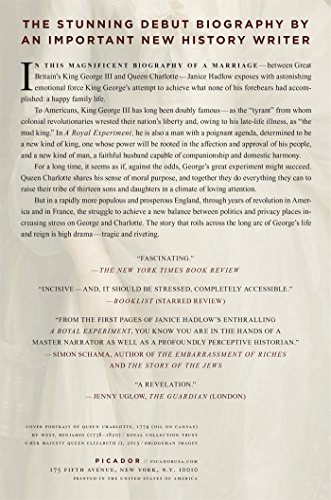 The stunning debut of an important new history writerIn this magnificent biography of a marriage-between Great Britain's King George III and Queen Charlotte-Janice Hadlow exposes with astonishing emotional force King George's attempt to achieve what none of his forebears had accomplished: a happy family life.To Americans, King George III has long been doubly famous-as the "tyrant" from whom colonial revolutionaries wrested their nation's liberty and, owing to his late-life illness, as "the mad king." In "A Royal Experiment, " he is also a man with a poignant agenda, determined to be a new kind of king, one whose power will be rooted in the affection and approval of his people, and a new kind of man, a faithful husband capable of companionship and domestic harmony. For a long time, it seems as if, against the odds, George's great experiment might succeed. Queen Charlotte shares his sense of moral purpose, and together they do everything they can to raise their tribe of thirteen sons and daughters in a climate of loving attention. But in a rapidly more populous and prosperous England, through years of revolution in America and in France, the struggle to achieve a new balance between politics and privacy places increasing stress on George and Charlotte. The story that roils across the long arc of George's life and reign is high drama-tragic and riveting.