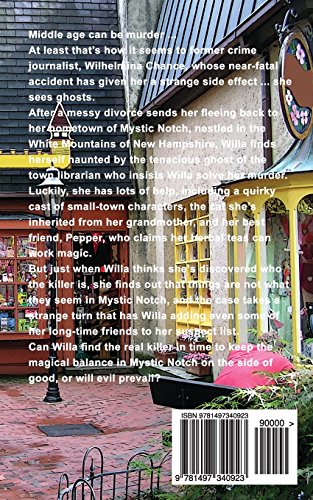 Middle age can be murder ... At least that's how it seems to former crime journalist, Wilhelmina Chance, whose near-fatal accident has given her a strange side effect ... she sees ghosts. After a messy divorce sends her fleeing back to her hometown of Mystic Notch, nestled in the White Mountains of New Hampshire, Willa finds herself haunted by the tenacious ghost of the town librarian who insists Willa solve her murder. Luckily, she has lots of help, including a quirky cast of small-town characters, the cat she's inherited from her grandmother, and her best friend, Pepper, who claims her herbal teas can work magic. But just when Willa thinks she's discovered who the killer is, she finds out that things are not what they seem in Mystic Notch, and the case takes a strange turn that has Willa adding even some of her long-time friends to her suspect list. Can Willa find the real killer in time to keep the magical balance in Mystic Notch on the side of good, or will evil prevail?