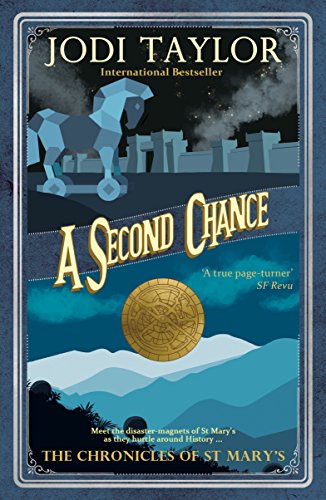 At St Mary’s Institute of Historical Research, the historians don’t just study the past, they revisit it.

Behind the strait-laced façade of a conventional academic institution, the secret of time travel is being used for ground-breaking and daring historical research, taking the historians on a rollercoaster ride through history. Meanwhile, within St Mary’s itself, there are power struggles and intrigues worthy of a book in themselves.
Follow the disaster magnet historians from an encounter with a mirror stealing Isaac Newton to the fabled city of Troy, and from the ancient, murderous cheese-rolling ceremony in Gloucester (which, incidentally, results in CBC – concussion by cheese) to the bloody battlefield at Agincourt.

It’s all happening for Max, so make the tea, grab the chocolate biscuits and discover exactly why the History Department has painted itself blue.

“A carnival ride through laughter and tears with a bit of time travel thrown in for spice . . . readers will be impatient for later installments.”
—Publishers Weekly, starred review

“Taylor does a great job of setting up an appealing cast of characters in this new series opener, most especially the intrepid Max. There is plenty of humor, lots of action, and even a touch of romance.”
—Library Journal

“Taylor has written a madcap and very funny hodgepodge of a novel whose pacing and humor is reminiscent of a Simon Pegg–Edgar Wright film.”
—Booklist

“Danger, romance, history, financial and academic politics, hidden agendas, dangerous assignments, characters you care about, and the feeling that more is going on than you're actually reading about. I can hardly wait for book two. Just One Damned Thing After Another is a true page-turner.”
—SFRevu