Showing From Martin to Despallier: The Story of a French Colonial Family by Rasmus Dahlqvist 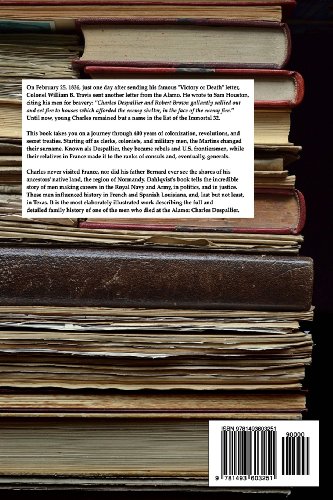 On February 25, 1836, just one day after sending his famous "Victory or Death" letter, Colonel William B. Travis sent another letter from the Alamo. He wrote to Major-General Sam Houston, Commander-in-Chief of the Texas Army, citing his men for bravery. He wrote: "Charles Despallier and Robert Brown gallantly sallied out and set fire to houses which afforded the enemy shelter, in the face of the enemy fire." Until now, young Charles remained but a name in the list of the Immortal 32. This book takes you on a journey through 400 years of colonization, revolutions, and secret treaties. Starting off as clerks, colonists, and military men, the Martins from France changed their last name. Now known as Despallier, they became rebels and U.S. frontiersmen, while their relatives in France made it to the ranks of consuls and, eventually, generals. Charles never visited France, nor did his father Bernard ever see the shores of his ancestors' native land, the ancient region of Normandy. Dahlqvist's book tells the incredible story of men making careers in the Royal Navy and Army, in politics, and in justice. These men influenced history in colonial Haiti, in French and Spanish Louisiana, and, last but not least, in Texas. It is the most elaborately illustrated work describing the full and detailed family history of one of the men who died at the Alamo: Charles Despallier.