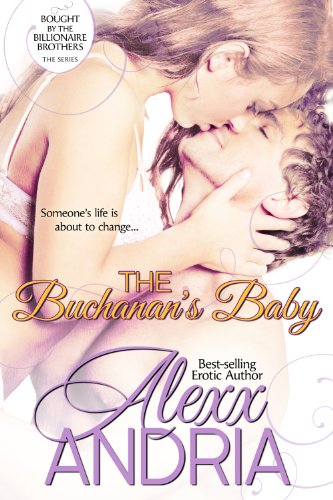 In THE BUCHANAN'S BABY, Nolan Buchanan, the twin known as the cool head with a charming smile, finds himself in a shocking position when he meets sports trainer Shannon Garrity. Unlike most women in his world, all Shannon wants from him is one night of no-strings-attached horizontal mambo. He's game -- why not? she's hot and he's always down for a little action -- but when she sticks to her word and leaves him in the bed, he's more than a little disappointed. Worse? He doesn't even know her name. More than a little disturbed that he wanted more, he tries to forget about the sexy girl who happily left him behind.

Shannon Garrity never does reckless or spontaneous -- except for that one time she went home with the hottest guy in the club for no-names, no-holds-barred, change-your-religion sex that left her aching, sore, and deliciously sated the next morning. However, six weeks later she realized that night with the hot guy with the beautiful eyes and dirty mind had created unexpected consequences. Suddenly a single mom, Shannon has no intentions of telling Nolan he'd fathered her child but fate has different plans.

Can Nolan put aside his wild bachelor life for a family of his own? Can Shannon trust that beneath that sexy bad boy billionaire veneer is a good guy just waiting for an equally good woman? Sparks fly when worlds and philosophies collide but a baby changes everything. (Contemporary romance, Alpha billionaire, billionaire romance, baby, HEA)

"Nolan..."
The strangled whisper told volumes. She tightened her hold on the child, who turned to stare at him with her finger in her mouth. "What are you doing here?" she asked, her eyes darting past him. "You shouldn't be here."
"There are a lot of places I shouldn't go but here isn't one of them."
"Please, Nolan. This is my job. I can't get into this with you right now."
"Too bad," he said, not willing to budge. "I have some questions and you're going to answer them." A surprising shock of awareness rippled through Nolan as he stared at the woman he last saw three years ago. His gaze returned to the toddler who was about three years old and that sickening lurch in his gut returned. He stared harder at the little girl and his brain quickly began picking out the easy similarities between himself and her fair features. "She mine?" he asked in a hard tone. When the woman's lips tightened as if refusing to answer he repeated the question only this time his gaze narrowed with unrestrained anger. "Is she mine?"
"No."
He wanted to believe her so he could walk away but the sad truth was he knew she was lying. He could plainly see Buchanan traits in that child. "You're lying."
"What are you doing here?" she asked plaintively, her eyes growing wet. "How did you find me?"
"Funny thing about that. I didn't find you. Someone sent me an anonymous note saying I had a kid. Honestly, I thought it was a ruse to shake me down for some money. But I see now that whatever their motives, it had nothing to do with money. Surprisingly."
"And you think I sent that note?" she asked incredulously. "Well, I didn't."
"I'm beginning to realize that. Regardless of who sent the damned note, don't you think it might've been prudent to let me know I had fathered a child?"
"No." She lifted her chin. "I never had any intentions of you knowing."


Author's Note: While THE BUCHANAN'S BABY is a great stand-alone story, you might enjoy the other books in the series as well! Interested? The other books are as follows: