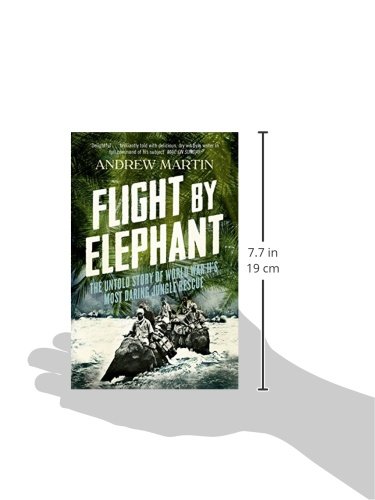 The incredible story of Gyles Mackrell and his Burmese, elephant-assisted wartime rescue mission.

In the summer of 1942, Gyles Mackrell – a decorated First World War pilot and tea plantation overseer, performed a series of heroic rescues in the hellish jungles of Japanese-occupied Burma – with the aid of twenty elephants.

At the age of 53, Mackrell went into the ‘green hell’ of the Chaukan Pass on the border of North Burma and Assam. Here, Mackrell and a team of elephant riders rescued Indian army soldiers, British civilians and their Indian servants, from the pursuing Japanese, directing the elephants through raging rivers, and territory infested with sand flies, mosquitoes and innumerable leeches. Those he saved were all on the point of death from starvation or fever: that summer was spent in a fight against time.

Now in Andrew Martin’s hands this tale of heroics is given the shape of a suspenseful adventure, a wartime rescue whose facts are the stuff of fiction. ‘Flight By Elephant’ is a gripping chronicle of war and survival, starring everyone’s favourite animal – the powerful, exotic and hugely loveable elephant.