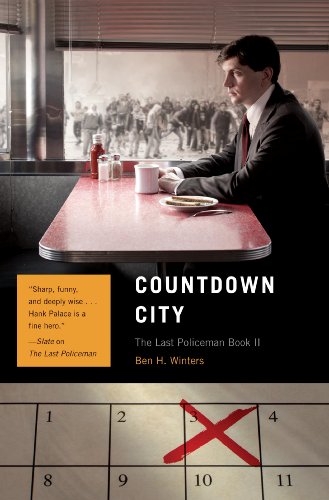 "[The] weird, beautiful, unapologetically apocalyptic Last Policeman trilogy is one of my favorite mystery series."—John Green, author of The Fault in Our Stars and Paper Towns

The Last Policeman received the 2013 Edgar Award for Best Paperback Original--along with plenty of glowing reviews.

Now Detective Hank Palace returns in Countdown City, the second volume of the Last Policeman trilogy. There are just 77 days before a deadly asteroid collides with Earth, and Detective Palace is out of a job. With the Concord police force operating under the auspices of the U.S. Justice Department, Hank's days of solving crimes are over...until a woman from his past begs for help finding her missing husband.

Brett Cavatone disappeared without a trace—an easy feat in a world with no phones, no cars, and no way to tell whether someone’s gone “bucket list” or just gone. With society falling to shambles, Hank pieces together what few clues he can, on a search that leads him from a college-campus-turned-anarchist-encampment to a crumbling coastal landscape where anti-immigrant militia fend off “impact zone” refugees.

Countdown City presents another fascinating mystery set on brink of an apocalypse--and once again, Hank Palace confronts questions way beyond "whodunit." What do we as human beings owe to one another? And what does it mean to be civilized when civilization is collapsing all around you?