Showing Anticipation of the Penitent by Nancy LaRonda Johnson 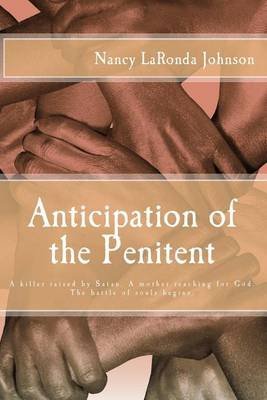 Trapped by the devil, Alezea bears Satan's son and knows her life will never be her own. She is the mother of Thomas, a man reared by Satan to be a killer of life's most innocent - little girls. Alezea lives detached from the horrors committed by her son and from her domination by the entity who uses her as he pleases. Until she meets Martha who shows her a way out. Now Alezea will risk her very soul to free Thomas from his father. The fight to save her son will either redeem Alezea or destroy her forever. Rachel knows Thomas' history, yet she believes her presence can transform him. Her belief in Thomas might send her fully into the devil's realm or provide an opening for God's miracles in both of their lives. In a scheme to continue his father's line, Thomas may ruin his alliance with Rachel or rend himself from the dominion he was born to hold. The impulse to contrive his future takes Thomas to new heights in his lifework as a killer and pushes him toward maturity, while being forced to encounter the astonishing truth of his heritage. Anticipation of the Penitent depicts the battle between good and evil in one family until it is rendered to its destined completion. Only then will it be known whether Alezea succeeds in her struggle for a life free from Satan's control.