Showing The Girls of Atomic City: The Untold Story of the Women Who Helped Win World War II by Denise Kiernan 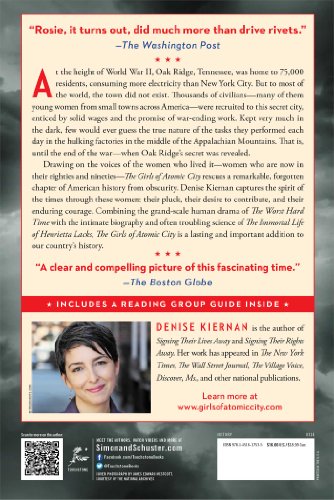 The "New York Times" bestseller, now available in paperback--an incredible true story of the top-secret World War II town of Oak Ridge, Tennessee, and the young women brought there unknowingly to help build the atomic bomb. "The best kind of nonfiction: marvelously reported, fluidly written, and a remarkable story...As meticulous and brilliant as it is compulsively readable." --Karen Abbott, author of "Sin in the Second City" At the height of World War II, Oak Ridge, Tennessee, was home to 75,000 residents, and consumed more electricity than New York City, yet it was shrouded in such secrecy that it did not appear on any map. Thousands of civilians, many of them young women from small towns across the U.S., were recruited to this secret city, enticed by the promise of solid wages and war-ending work. What were they actually "doing" there? Very few knew. The purpose of this mysterious government project was kept a secret from the outside world and from the majority of the residents themselves. Some wondered why, despite the constant work and round-the-clock activity in this makeshift town, did no tangible product of any kind ever seem to leave its guarded gates? The women who kept this town running would find out at the end of the war, when Oak Ridge's secret was revealed and changed the world forever. Drawing from the voices and experiences of the women who lived and worked in Oak Ridge, "The Girls of Atomic City" rescues a remarkable, forgotten chapter of World War II from obscurity. Denise Kiernan captures the spirit of the times through these women: their pluck, their desire to contribute, and their enduring courage. "A phenomenal story," and "Publishers Weekly" called it an "intimate and revealing glimpse into one of the most important scientific developments in history." "Kiernan has amassed a deep reservoir of intimate details of what life was like for women living in the secret city...Rosie, it turns out, did much more than drive rivets." "--The Washington Po