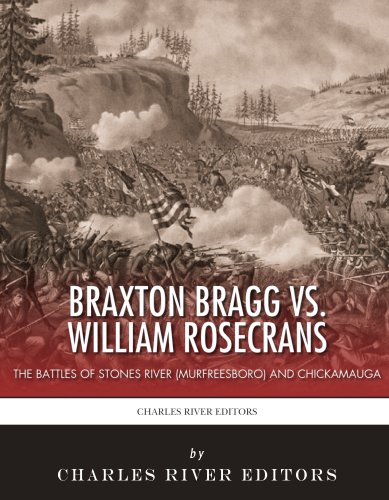 “I know Mr. Davis thinks he can do a great many things other men would hesitate to attempt. For instance, he tried to do what God failed to do. He tried to make a soldier of Braxton Bragg.” – General Joseph E. Johnston

Of all the commanders who led armies during major battles of the Civil War, historians have by and large agreed that the most inept generals to face each other were the Union’s William Rosecrans and the Confederacy’s Braxton Bragg. The two generals would command the Union Army of the Cumberland and the Confederate Army of Tennessee against each other during the Battle of Stones River (Battle of Murfreesboro) at the end of 1862 and at the Battle of Chickamauga in September 1863, two of the deadliest and most controversial battles of the war.

In late December 1862, William Rosecrans’s Union Army of the Cumberland was contesting Middle Tennessee against Braxton Bragg’s Army of Tennessee, and for three days the two armies savaged each other as Bragg threw his army at Rosecrans in a series of desperate assaults. Bragg’s army was unable to dislodge the Union army, and he eventually withdrew his army after learning that Rosecrans was on the verge of receiving reinforcements. Though the battle was stalemated, the fact that the Union army was left in possession of the field allowed Rosecrans to declare victory and embarrassed Bragg.

Though Stones River is mostly overlooked as a Civil War battle today, it had a decisive impact on the war. The two armies had both suffered nearly 33% casualties, an astounding number in 1862 that also ensured Rosecrans would not start another offensive campaign in Tennessee until the following June. The Union victory also ensured control of Nashville, Middle Tennessee, and Kentucky for the rest of the war, prompting Lincoln to tell Rosecrans, “You gave us a hard-earned victory, which had there been a defeat instead, the nation could scarcely have lived over." The battle and its results also set into motion a chain of events that would lead to Rosecrans and Bragg facing off at the crucial battle of Chickamauga in September 1863, a battle that is often viewed as the last gasp for the Confederates’ hopes in the West.

During the height of the Battle of Chickamauga, Rosecrans inadvertently created a gap in his line just as a Confederate attack led by James Longstreet advanced straight toward that part of the line. Longstreet's attack was successful in driving one-third of the Union Army off the field, with Rosecrans himself running all the way to Chattanooga, where he was later allegedly found weeping and seeking solace from a staff priest.

As the Confederate assault continued, George H. Thomas led the Union left wing against heavy Confederate attack even after nearly half of the Union army abandoned their defenses and retreated from the battlefield, racing toward Chattanooga. Dubbed “The Rock of Chickamauga”, Thomas’s heroics ensured that Rosecrans’ army was able to successfully retreat back to Chattanooga.

In the aftermath of the Battle of Chickamauga, several Confederate generals blamed the number of men lost during what would be the bloodiest battle of the Western Theater on Bragg’s incompetence, and also criticizing him for refusing to pursue the escaping Union army. General Longstreet later stated to Jefferson Davis, “Nothing but the hand of God can help as long as we have our present commander.”