Showing Daughter of Empire: My Life as a Mountbatten by Lady Pamela Hicks 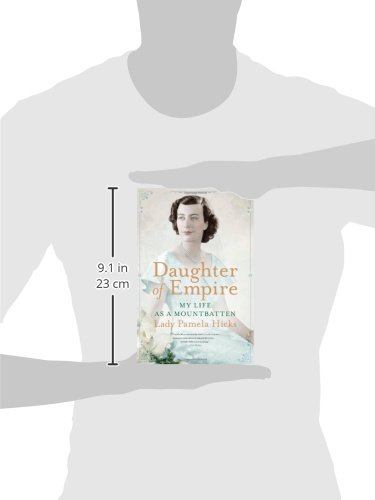 This magical memoir about a singular childhood in England and India by the daughter of Lord Louis and Edwina Mountbatten provides a privileged glimpse into the lives and loves of some of the twentieth century's leading figures.Few families can boast of not one but two saints among their ancestors, not to mention a great aunt who was the last tsarina of Russia, a father admired by Grace Kelly, and a grandmother who was not only a princess but could also argue the finer points of naval law. As the younger daughter of Lord and Lady Mountbatten, Pamela Hicks's childhood was an extraordinary whirlwind of British aristocracy, English eccentricity, Hollywood glamour, and political education. The King of Spain ordered the Ritz in Madrid to be surrounded by soldiers as Pamela's mother gave birth to her there--and laid her in a dog bed for a cradle. Her childhood pets included, at different times, a bear, two wallabies, a mongoose, and a lion. Her parents each had lovers who lived openly with the family. The house was always full of guests like Sir Winston Churchill, Noel Coward, Douglas Fairbanks, and the Duchess of Windsor (who brought her mother a cold cooked chicken as a hostess gift). During World War II she was sent to live on Fifth Avenue in New York City with Mrs. Cornelius Vanderbilt. In 1947, her parents were appointed to be the last Viceroy and Vicereine of India, and Pamela developed her own relationships with Gandhi and Nehru. She served as a bridesmaid in Princess Elizabeth's wedding to Prince Phillip and was at her side as lady-in-waiting when the young princess learned her father had died and she was queen. Vivid and engaging, well paced and superbly detailed, this witty, intimate memoir is an enchanting lens through which to view the early part of the twentieth century.